After seven days now here at ITMA 2019, I’m beginning to understand why we need to let sensors do more of the work for us because I’m definitely suffering from information overload.

A good example of how sensors are being more seriously employed on even the most well-established textile technologies can be found at the stand of local company Comsat, which is headquartered right here in Barcelona. 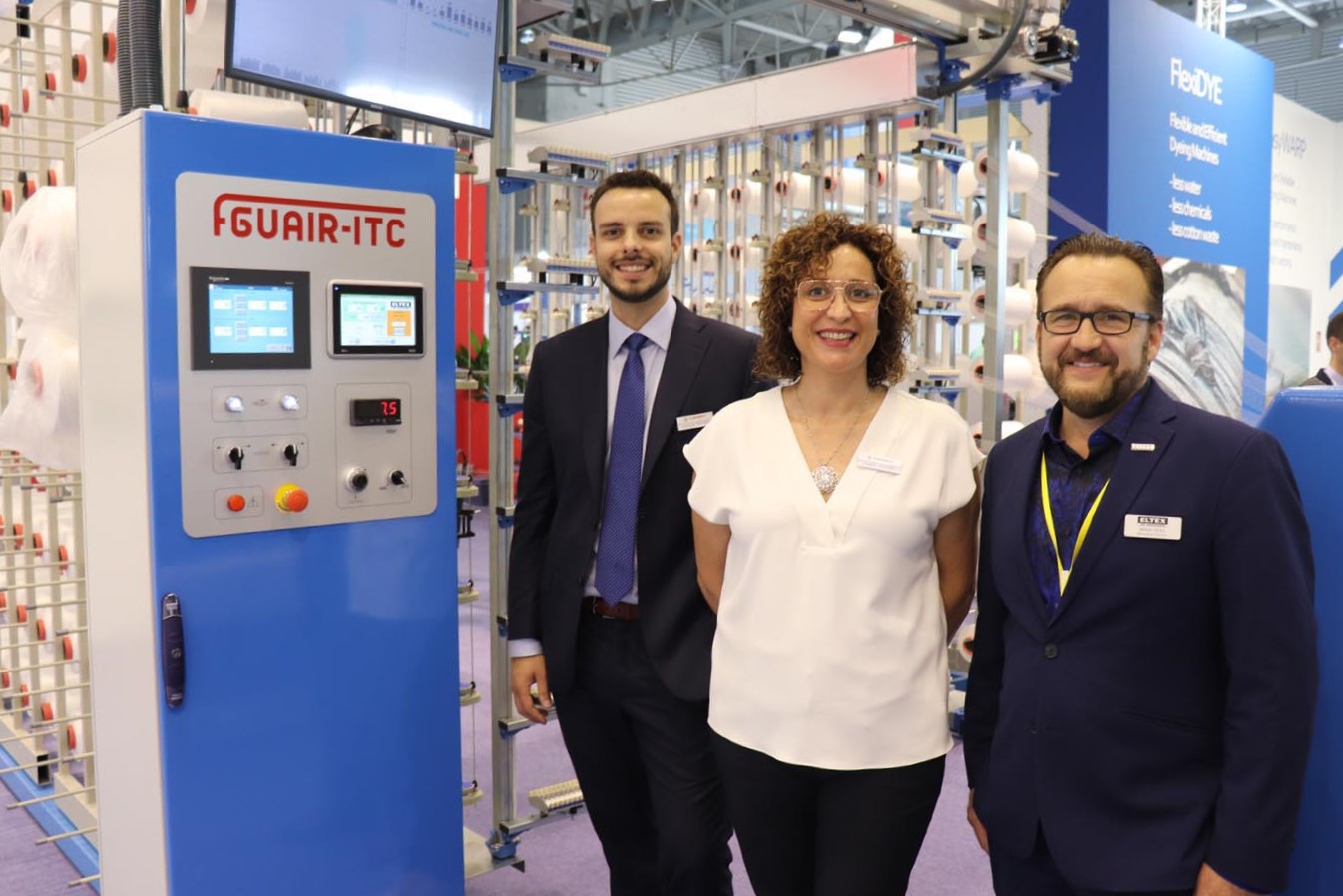 Pictured are Ferram and Isabel Mataró of Comsat with Brian Hicks of Eltex.

Comsat is equipping its latest Tecmat sectional warper for weaving preparation with the new Eltex EyETM yarn tension monitoring system, which can also be retrofitted to existing Comsat machines already in operation.

Several hundred yarns can be fed from the creels during the warping process compared to only a few weft insertion yarns during weaving,” explains Brian Hicks, managing director of Eltex.

With warping that can operate at high speeds, the yarn tension values from all yarns are continuously updated and displayed on the screen,” adds Isabel Mataró of Comsat. “Tension values outside the warning level are indicated both on the sensor’s LEDs and on the screen. This greatly increases yarn evenness and subsequently the woven fabric quality.

Also packed with intelligence is the new Saurer Autoairo air-spinning machine which has been the subject of tremendous interest here at ITMA 2019. 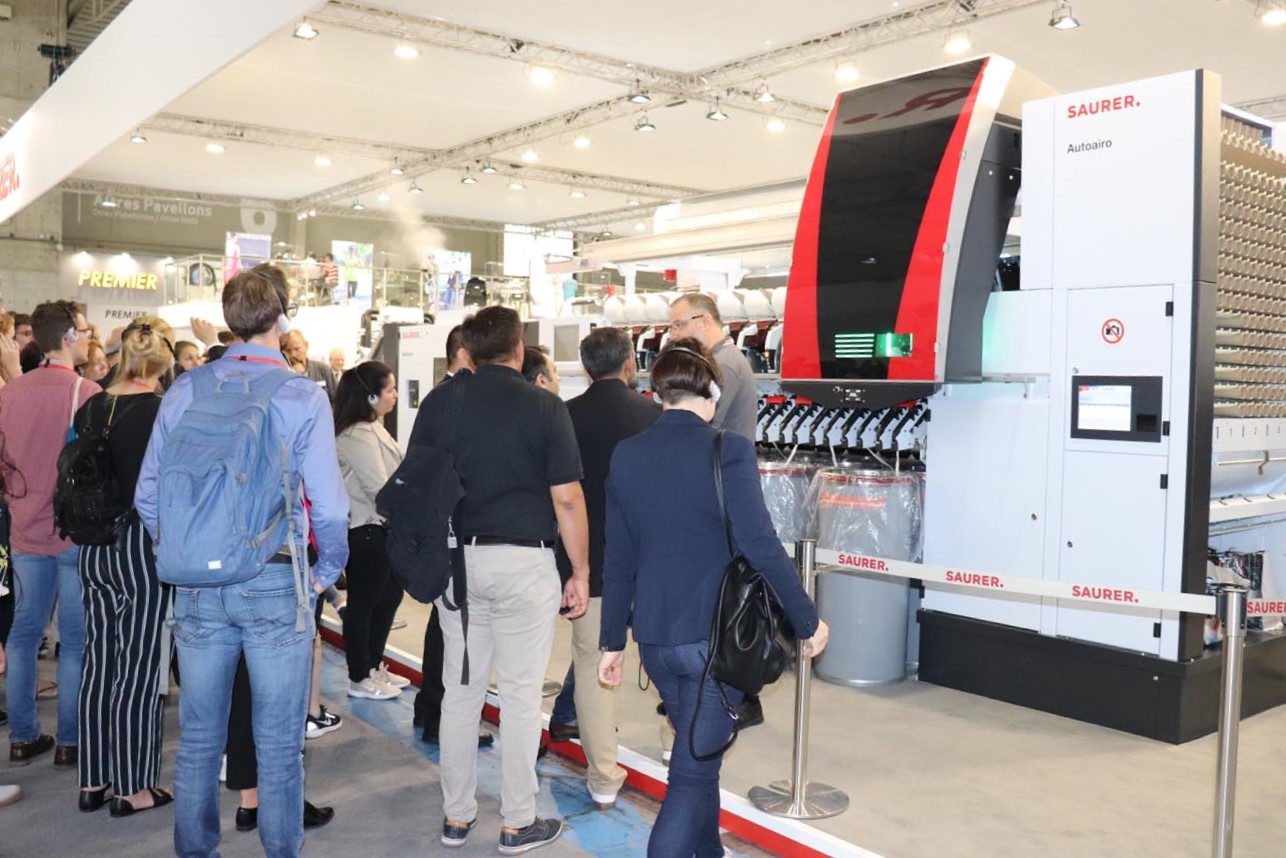 The Autoairo has autonomous spinning positions with individual drives, integrated intelligence and a digital piecing unit. Twenty-four piecing operations can be carried out simultaneously with the SynchroPiecing 24 system – roughly twice as many as machines already on the market. Up to four lots can be spun on the Autoairo at the same time and seamless lot changes during ongoing production are possible.

Saurer has already sold a number of these machines at the show, the first to Zagis, a Mexican textile company. “The Autoairo combines the advantages of air spinning with the world’s most advanced automation technologies,” says Mayer Zaga Galante, CEO of Zagis. “Saurer’s digitised single spinning position technology is a groundbreaking basis for intelligent automation and highly competitive in every respect.”

The big investment news here at the show has been the announcement of a comprehensive modernisation programme for Egypt’s textile industry. This will involve deliveries of equipment valued at around €1 billion from ITMA 2019 exhibitors including Benninger, Brückner, EFI Reggiani, Itema, Karl Mayer, Rieter, Savio and Thies. It includes the provision of some 780,000 new spindles along with 1,250 weaving looms.

Spinning technology leader Rieter alone will deliver compact and ring spinning systems to Egypt’s Cotton and Textile Industries Holding Company over the next two years, with a value of roughly €185 million for seven separate projects.

In addition to sensors, robots are also cropping up here at ITMA 2019, promising to make work in the textile industry even easier for us mere humans. 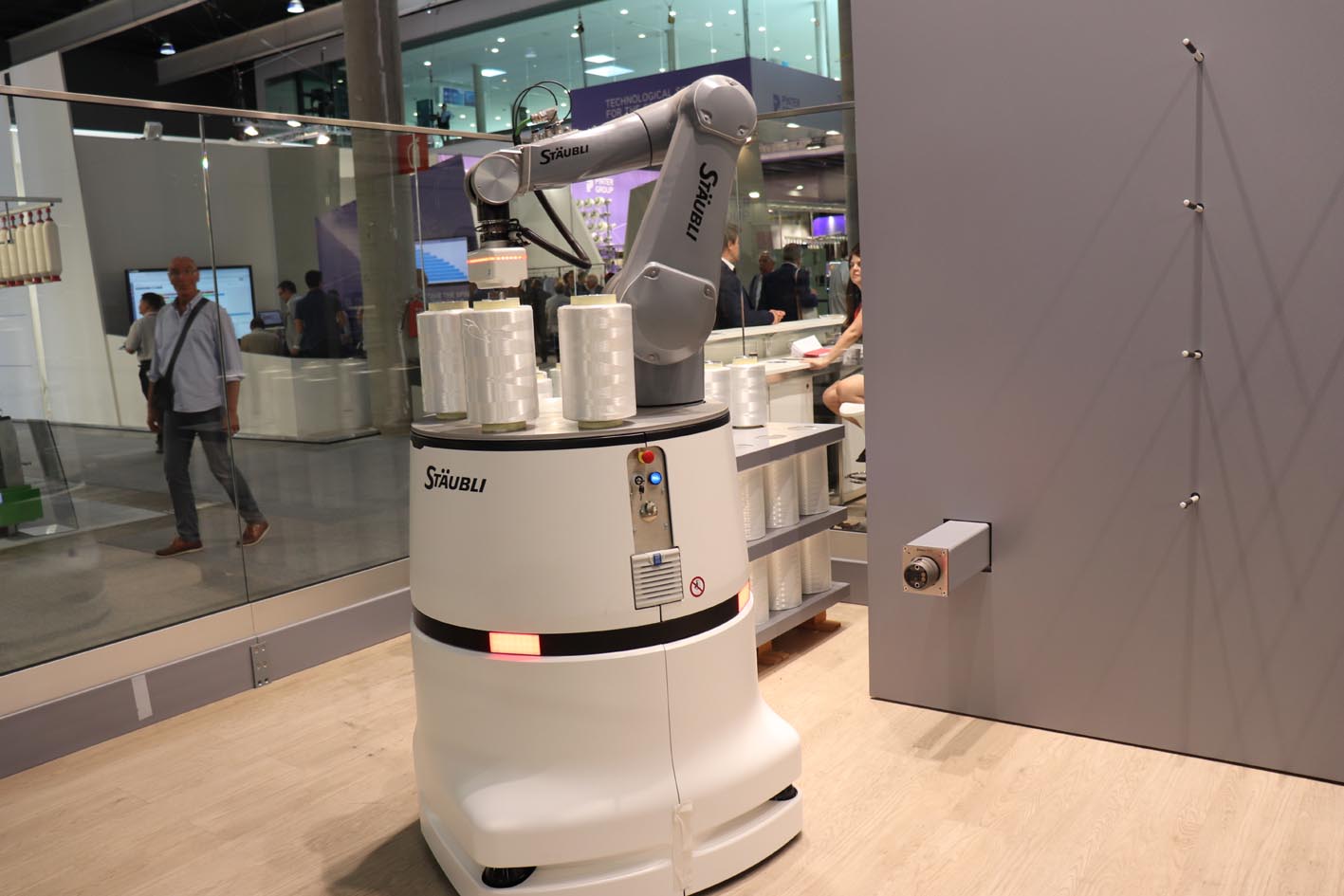 In Hall 4 the new HelMo mobile robot system can be seen autonomously driving and navigating as it moves bobbins between work stations and machines. Jointly developed by Stäubli and Ontec, it is equipped with three laser scanners which permanently monitor its surroundings and ensure precise navigation and safety when working alongside human operators.

Meanwhile, in Hall 3, ACG Kinna Automatic has been providing demonstrations of its new robotic pillow filling system which has the ability to fill and finish some 3,840 pillows per eight-hour shift. This is a considerable improvement on what is currently possible with either manual or semi-automatic systems, resulting in significant savings in both labour and energy for busy home textile businesses. 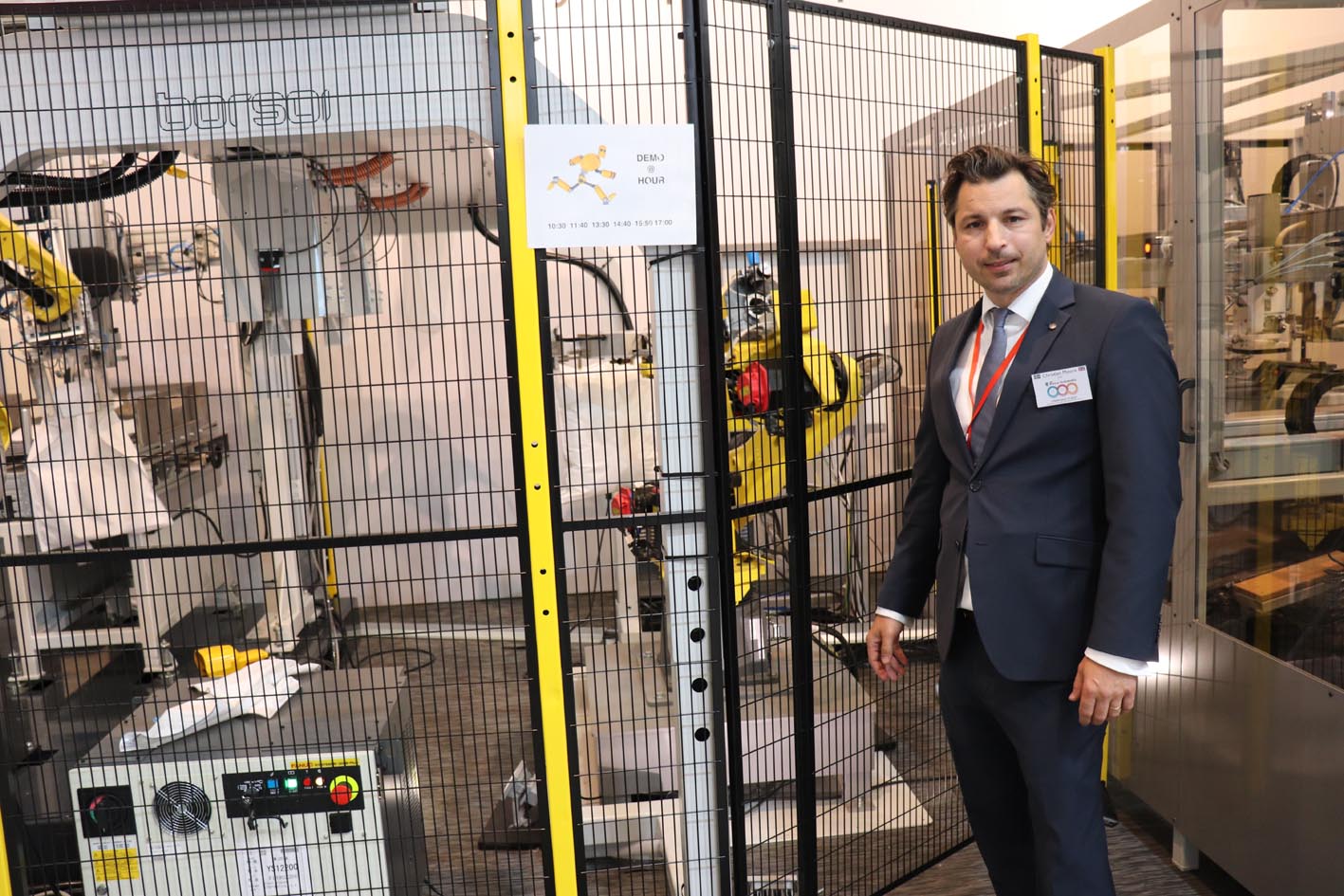 The technology is based on two robotic arms from Japan’s Fanuc – the world’s biggest robotics brand – which have been specially modified by ACG Kinna with advanced gripping tools and seaming and labelling devices. The pillows are automatically sealed with either single or double lockstitch seams and labels can be attached without interrupting the flow of the system.

There has been much talk about the potential of Industry 4.0 enabled by advanced software and now I believe we are at the forefront of pioneering it,” said ACG Kinna CEO Christian Moore. “The use of robotics is now standard across many industries dealing in solid goods, but the handling of soft materials such as textiles is a little more complex.

A Moore’s Law for fibres

Finally another glimpse of future possibilities came in an inspiring presentation by Professor Yoel Fink, CEO of AFFOA (Advanced Functional Fibers of America). AFFOA has risen from incubator work at MIT and now has a substantial number of members at all stages of the textile supply chain involved in the rapid prototyping of smart new products on conventional technology.

Our clothes help define us, yet the fabrics we wear have remained functionally unchanged for thousands of years,” he said. “Recent breakthroughs in fibre materials and manufacturing processes will soon allow us to design and wear fabrics that see, hear, sense, communicate, store and convert energy, regulate temperature, monitor health and change colour.

This, he added, would result in “a Moore’s Law for fibres”, in which their applications multiply rapidly in the next few years. “Fibres are primarily a single material but nothing that functions is a single material,” Fink said. “The magic number is three, to turn fibres into semiconductors – typically consisting filaments acting as an insulator, conductor and semiconductor. These will turn fabrics into prime real estate.

With a range of products now emerging in the US, who knows where we’ll be with all of this by the time ITMA 2023 comes around. 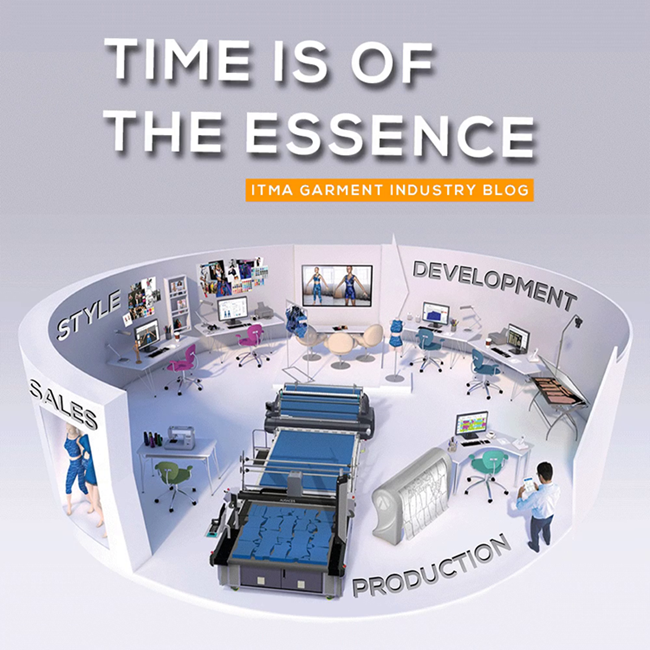 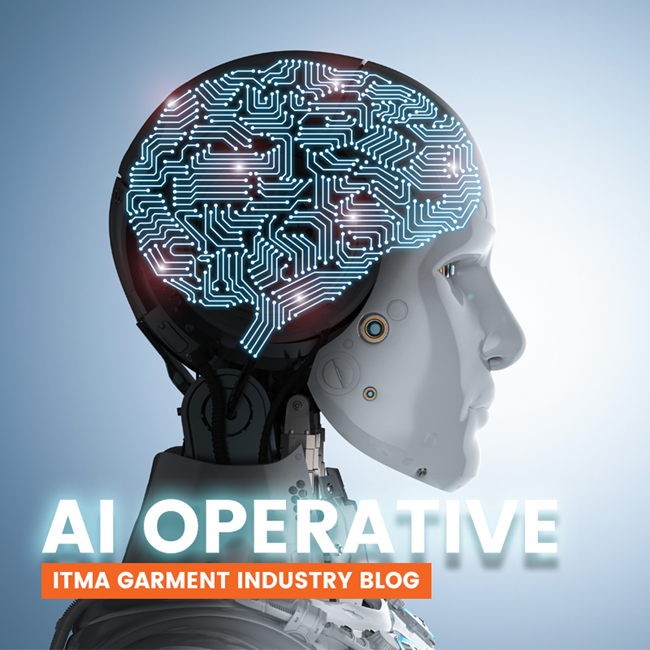 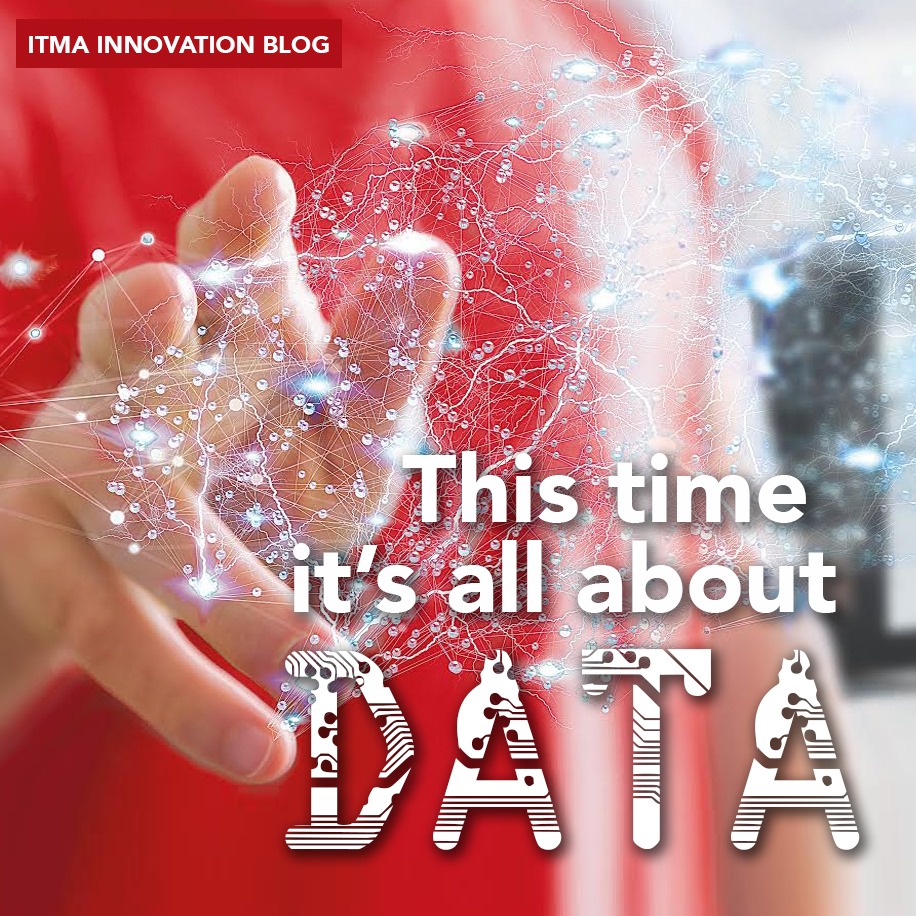